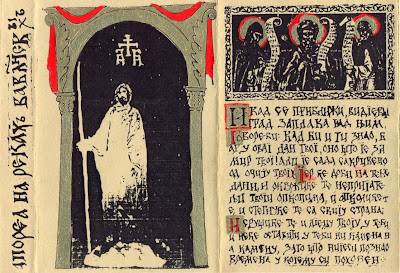 The excitement of finding and sharing these kind of things was one of the reasons I started doing my blog 2 years ago. To find anything on this scale of importance in Yugoslav scene was unimaginable at the time when I stumbled upon it and so far, it really can't be paralleled by anything. It is a great joy indeed to share this.

Talking about Makedonska Streljba in the last post was a nice innuendo for this one. On the very fringes of the Makedonska Streljba movement there were several very interesting developments most of whom remained unfamiliar even in the Macedonian public, let alone in Yugoslavia or world. Certainly the most important of these is Aporea or Apokrifna Realnost [or Apocryphal Reality, Macedonian Cyrillic: Апореа/Апокрифна Реалност] from Skopje, a multimedia project whose musical output could easily fit the best tradition of any ritual industrial bands that rose in mid and late 80es era on labels like Nekrophile Rekords, ADN, Touch, etc. What was an important influence for all of the bands from Makedonska Streljba, for Aporea it was a starting ground: the active exploration of the complex relationships with their own cultural and spiritual heritage through a specific postmodern, westernized frame of work - art exhibitions, music distributing, subcultural activity, as means of reconciling their people with the new reality they were heading to, but in the same time - finding an adequate modus viviendi for an individual's own spiritual continuance within the sociological context of postmodern Europe. In Aporea's mythology, the context in which that transition would be made possible is referred to as "New Europe" and it is best described in words of Goran Lišnjić's 1989 article "Lanterna Magica" about Aporea: "Spiritual nation becomes and remains in the spiritual homeland without borders".

Under the spiritual guidance of Father Stefan Sandžakovski of the Macedonian Orthodox Church, Aporea was a loose collective of people of whom the most prominent were Goran Trajkoski, Zoran Spasovski, Klime Kovačevski, Metodij Zlatanov and Neven Ćulibrk. The remaining outer core was comprised of painters-iconographers and calligraphers Kiril Zlatanov (brother of the aforementioned Metodij) and Lazar Lečić as well as Predrag Cvetičanin, frontman of the Niš post-punk band Dobri Isak. On the eve of the last ever gig of Padot Na Vizantija, that took place in Banjaluka (Bosnia and Herzegovina) in July of 1985, Goran Trajkovski met an ardent fan of Padot Na Vizantija's work - Neven Ćulibrk (nowadays Father Jovan Ćulibrk, mentioned in the previous post), local alternative culture activist-journalist, part-time member of NEP and literature student with a particular interest in traditionalism and matters of faith. It was this friendship that made Aporea come to life and soon, in August of 1985 the first Aporea get-together was organized in Struga (Macedonia). In April of 1986 the very first public manifestation of Aporea was organized in the Pedagogical Academy of Banjaluka in the form of an art-exhibition that tackled the issues of the relationship between the East and the West, the traditional and the modern, through referencing and juxtaposting the diverse historical avant-gardes that existed in the Balkans in various periods of time [i.e. the art of Leonid Šejka or Ljubomir Micić's Zenitism] that also dealt with the issue. Until autumn of 1986 Aporea made the first and only issue of their fanzine of the same name, followed by the 1987 release of a fanzine-book "Apokrifna Realnost" that had somewhat of a role of a manifest. The only music document of Aporea "Na Rekah Vavilonskih" was recorded and distributed on a cheap cassette tape in 1988 for the occasion of ongoing TV documentary project about life and work of a painter-iconographer Lazar Lečić from Čurug (Serbia), a member of Aporea at the time. Due to the fact that in the brief period after the cease of activities of Padot Na Vizantija in 1985, Goran Trajkoski and Zoran Spasovski got involved with Mizar, Macedonian mega-band, as well as the fact that Neven Ćulibrk lived mostly between Zagreb and Banjaluka, Aporea only made a scarce documentation of its existence. There isn't a strict point in time when Aporea became Anastasia, but it somehow coincided with the abandonment of Aporea's multimedia activity that a new band, a strictly music-oriented Anastasia, followed. In that respect, it could be said that Aporea lasted until 1988 when a performance/exhibition of Metodij Zlatanov's visual poetry entitled "Sveti Jovan Neroden" was held in Zagreb's Lapidarij. Contrary to what I said in the previous post [more specifically on the entry on NEP], Aporea actually never performed live as a music group.

Unlike Aporea, Anastasia not only did perform live, but it also became a life-project of Goran Trajkoski and Zoran Spasovski and it didn't took long for Anastasia to conquer the music world with a amazing soundtrack for the 1994 Milčo Mančevski film "Before The Rain" (Pred Doždot). 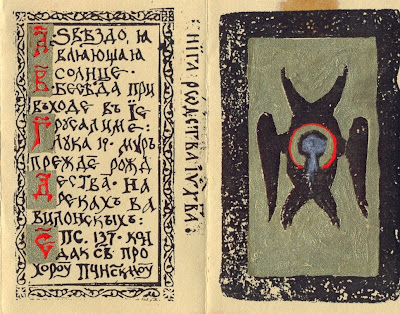 The tape artwork is actually taken from a painting by Lazar Lečić entitled "Ratnik" (Warrior). On the tape itself we have song titles in Church-Slavonic assorted in Greek Alphabet (А В Г Д Е) instead of Azbuka order (А Б В Г Д), thus paying tribute to the Greek influence in origins of Slavonic literacy. In an attempt to avoid confusion, I left the songs as "Untitled" on the file names, because I don't think lot of people have Church Slavonic language packs installed on their computers. Although somebody took the time and transcribed the track names to a hypothetical variant of Macedonian Latin Alphabet and even left a tutorial how he did it, I really wouldn't know wheter is it correct or not. Here it is nonetheless:

On the cover there is a verse from the Gospel of Luke 19:41-44 written in archaic Serbian Cyrillic:

"And when he was come near, he beheld the city, and wept over it, Saying, if thou hadst known, even thou, at least in this thy day, the things which belong unto thy peace! but now they are hid from thine eyes. For the days shall come upon thee, that thine enemies shall cast a trench about thee, and compass thee round, and keep thee in on every side, And shall lay thee even with the ground, and thy children within thee; and they shall not leave in thee one stone upon another; because thou knewest not the time of thy visitation."

In this tape of mere 19 minutes, we have two faces of Aporea that correspond to the two sides of the cassette. On the A Side side we a have a grave and toilsome atmosphere where the resonance of the sound is prominent more than anything. In the first song "The Star which announces The Sun" - the dripping from the cave walls adds to the suspense atmosphere amid church bells chiming and voices chanting liturgical hymns. After it, the highpoint of A Side "The utterance upon entering Jerusalem" features a perfectly simplistic, crude and sparse, but equally as effective one-string plucking of an archaic instrument which accompanies a voice reciting the verses from Luke 19: 41-44 on Church-Slavonic. This is indeed, apocryphal, catacomb music of the early Christians: those of the persecuted, dispossessed and abandoned. "The World Before Birth" (A3) is a pittoresque, dreamy percussion piece on a xylophone-like instrument with distant, faded flutes and bells that create vague hints of traditional Balkan ethno-motifs. On the B Side, we have a much more traditional song structure. "On The Rivers of Babylon" (B1) is an absolute climax of the tape, the track in question being a rather raw, unpolished and sometimes even unequally paced, but all-together mesmerizing piece improvised on traditional Macedonian instruments. Finally, the "Verses for St. Prochorus of Pčinja" close the album with an example of traditional Orthodox church-chanting. Download the tape - HERE

Okay, everybody pay attention now - the Aporea book is one of the most remarkable documents of the cassette culture era. However, it's not on English: most of it is on Serbian and Macedonian, with a couple of passages being on Latin and Greek. I will dare not trying to give it a proper review, as it requires someone much more articulate than me, but I will just repeat what I was said by the person who ripped it. There are couple of graphics towards the middle that are repeating and that's not an error, it's like that in the original book. It is conceived to be read from both sides as reflected in the opening words/lyrics of a Padot Na Vizantija song - "Početok i Kraj" (Beginning and the End). Being a PDF-scan the full impression of it will not be properly experienced because in places it was hand-waxed and some parts of it are inscribed in golden colour. Download the book - HERE

The tape was downloaded from a Macedonian torrent tracker last year, where a guy ripped it in 320kbs and the PDF-book is a rip from our kind donor from Osijek - Goran Lišnjić. Thanks again to our expert-consultant on the matters of art and tradition - Nikola of Kinovia as well as Goran Trajkoski and Father Jovan Ćulibrk the biographical data provided.
Posted by hogon at 4:44 PM

Wow! This is arguably the most extraordinary cassette release I have seen in my life. The amazing booklet artwork alone is worth the download. I loved the ceremony's archaic sonorities, sparse percussion and marimbas, the highly resonant space adding to the mystery. An amazing post, Hogon. Thanks a lot.

Wow, indeed ! That's quite a honour coming from someone with your taste [and mileage!] in audio-experimentalism. Glad you liked it that much :)

btw, I first time heard about Dubravko Detoni/Acezantez in your last year's Arsenije Jovanović article and have been looking for him since. Great you shared those, much obliged. Have you heard Begnagrad from Slovenia, a mid-70es avant-jazz ensamble heavily influenced by native alpine-folk traditions, but also by RIO bands ? That's quite an odd one.

No, I'm not familiar with Begnagrad. I thought I heard of it on some Recommended Records Quartely LPs, but I can't find it right now. They published Stevan Kovacs Tickmayer though.

Thanks a lot for making this rare mucic cassette available. I have searched for this since 1994.

I live in Stockholm and have no relations with former Yoguslavia. However I think Anastasia and Mizar made interesting music during the late 80's and beginning of the 90´s and now my 12 year old daughter like them. It is fantastic that its possible now 16 years later to find everything on the net. In the mid 90's I had to search a long time to find the Anastasia LP from 1990 with a later version of "Na Rekah Vavilonskih" and the "Lola V.Stein/Mansarda" CD. However, I never found the Aporea music cassette for sale, nor the book. Not until today, 16 years later. Thanks a lot!

Well, what can I say except that I am very glad for you Richard? :)

May you and your daughter listen to it in good health.

Beautiful, beautiful!
Thank you for sharing!

The booklet is amasing, just amasing!

Wonderful! A good friend sent me a link to this page. This type of music and art is RIGHT up my alley. Thank you so much for the detailed history and download!

Re-upped the album with the zine in the same thing.

Hello, great post. Listened to this on youtube, as the links are dead. Any possibility of a re-up of both the album and the zine? Thanks.

I can upload cassete scan to.

ayayay, i thought i moved all the DL links to mediafire last time.