(A sneak preview of an article originally scheduled to be published on 28.06.2014 for the Czech online magazine Easterndaze) 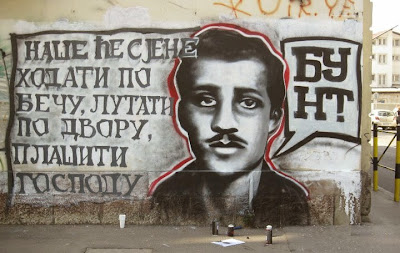 Our shadows will be roaming through Vienna,
wandering through the courts, frightening the lords.

Today, on the 100th anniversary of the Sarajevo assassination, an event which ignited a sequence of international reactions which will lead to First World War and ultimately mark the downfall of the Habsburg dynasty, Easterndaze in cooperation with A hogon’s industrial guide is proud to present you a release which commemorates the man who pulled the trigger on the tottering dinosaur of imperialism in Central Europe.

Claimed by leftists and nationalists alike, Gavrilo Princip is hard to classify by today’s criteria. He was Yugoslav nationalist who believed in national unity, the organic bond of language and blood and their progressive role which drives the world forwards[1], but in the same time he was also a liberationist, an anti-authoritarian figure who drew heavily from the anarchist tradition. From his standpoint, nationalist and liberationist ideas were not in necessary collision and, like many of his comrades from Mlada Bosna, he often oscillated between right-wing and left-wing politics in a way which may appear strange today.

But rather then to further dwell upon matters resolved by serious historians 40 years ago (blissfully unaware of the forthcoming revisionist frenzies within the various micro-contexts of post-communist Eastern Europe), we propose a much more interesting alternative – a détournement.
____ 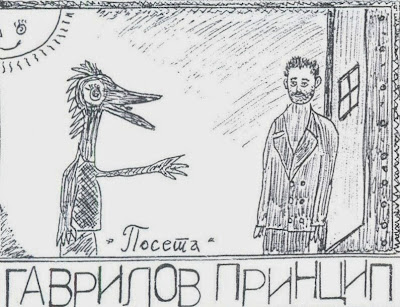 Poseta (Serbian for "Visitation") is a 1998 self-released cassette of a short-lived hometaping group Gavrilov princip active in Kragujevac (Serbia, then part of rump FR Yugoslavia, successor state of SFRY) from 1993 to 1999.

Gavrilov princip (Serbian for “Gavrilo’s principle”, a pun on the name of Gavrilo Princip) was a joint collaborative effort of Miodrag Saramandić from Aranđelovac (Serbia), a local demo veteran and instigator of a few DIY bands which remained unbeknown to majority of alternative music publics in Serbia, and Predrag Petrović alias Phantom, a legend of the Yugoslav hometaping network from Kragujevac (Serbia) responsible for a host of DIY experimental music projects like Fast Deadboy[2] (1983-1993, 1995-), Rubbishmen alternative jazz (1984-1986) and Phantom (circa 1995), DIY punk/experimental labels such as Dead Tapes and Phantom Tapes as well as fanzines like Instant gladna igra (Serbian for “Quick hungry game”), Phantom and Larynx of the Fast Deadboy, etc.

Phantom has been active in the Yugoslav underground since early 1980s as a versatile multimedia artist – poet, performer, painter[3], mail artist and a musician. In 1983 he started Fast Deadboy, quixotic brew of no-fi industrial music, punk-infused sound poetry and one-man dada theatre, arguably one of the most radical experimental music outfits within the Yugoslav cassette scene. Through his earliest works as Fast Deadboy, Phantom, a voracious autodidact and an electronics hobbyist, made a trademark of using modified, customized and entirely self-built music gear in addition to more or less standard set hometaping practices such as tape manipulation, using found instruments, etc[4]. However, later on – towards the end of the 1980s, Fast Deadboy entered in its ‘primitivist’ phase where he tried to limit the technological impact upon the creative process as much as possible in order to focus on basic acoustic experimenting in the best tradition of 1960s sound poetry. Although he was conceptually and ideologically close to the Fluxus movement, Phantom was a punk, who always self-described his music as punk, associated exclusively within the punk scene[5] and along with fellow hometapers from central Serbia like Larynx (Požarevac) and Pandora’s Shit Box (Smederevo), was long considered a sub-phenomenon of the thriving punk scene in Serbia.

On the other hand, Saramandić was multi-instrumentalist musician, supporting the most diverse groups in Aranđelovac and Kragujevac in various capacities (as a guitarist, keyboardist, flutist, etc). While his own groups like Dijagnoza 33 and its successor Mačak Fric (Serbian for “Fritz the Cat”) were more or less attempts down the rock alley, Saramandić also did a lot of solo experimentation, producing music which ranged everywhere from ambient to psychedelic. However, unlike Petrović, Saramandić was somewhat of a recluse who neither cared about promoting his music in any way nor was even intent on presenting it as a coherent production (by formally naming his hometaping projects, for instance).

The two met sometime around 1992 when Saramandić had only recently moved to Kragujevac and was frequenting the local Studentski Kulturni Centar (or SKC; Serbian for Student’s Cultural Centre) venue where Petrović had worked as a doorsman at the time[6]. About the same time, in 1993, Petrović had just came out through a creative (and not only creative) crisis during which he temporarily aborted all of his activities as Fast Deadboy and destroyed a sizeable part of his archive in the process. The friendship and collaboration with Saramandić came in a period when Phantom was radically rethinking his strategies, which resulted in some of the most diverse recordings he has ever made like Ti si gad (američkim pilotima u leto 1995)[7] (not on label-Kragujevac, 1995) – the only album recorded under the Phantom epithet – and Najezda skakavaca / Heuschreckenplage[8] (Nacionalna Asocijacija za Umetnost i Kulturu-Belgrade, 2013), which was a 1995 recording laying unreleased until 2013 and only then retroactively attributed to the Fast Deadboy chronology. Both of these albums – one of vague industrial rock orientation and the other of dozy, surreal ambiances – present a significant break with the characteristic Phantom sound.

Through Saramandić’s and Petrović’s friendship, Gavrilov princip was eventually born in January of 1993. The group was organized as a session based endeavor, predicated by irregular meetings at Saramandić’s place, where he had an improvised recording studio[9]. Musically, Gavrilov princip’s was structured around a particular machine – the 1970 Farfisa Professional Duo organ – which provided the conceptual backbone to the project. The lineup solidified with the addition of Nenad ‘Jakob’ Jakovljević from Zvoncekova Bilježnica and Slovenska Nekropola on bass, but the group remained open for occasional input of other session musicians like Nenad ‘Gliša’ Glišić from Mini Dada Teatar – an another cassette experimentalist project from Kragujevac[10]. One of the routine practices of Gavrilov princip was setting the verses of Jovan Jovanović Zmaj, Jovan Dučić and other poets to their outlandish soundscapes. Apart from several tapes of disorganized and largely unpolished demo recordings, the Poseta (not on label-Kragujevac, 1998) cassette represents Gavrilov princip’s sole statement as a group.

Within his 1990s oeuvre which mostly comprised cut’n’paste works of heavily processed glitch loops, Poseta with its organic feel stands out as one of the most musical and approachable things Phantom did. The Poseta recording sessions took place on 30.11. and 01.01.1998 and afterwards Saramandić did the final mix. The tape was released in December 1998 in an unspecified number of copies, between 50 and 100. As with all Phantom-related material, it wasn’t officially distributed anywhere but rather sold, given away or exchanged for other items privately[11]. Featured on the front-cover is a duck-like creature often seen in Phantom’s visual mythology which, perhaps, corresponds with him (Phantom). The creature visits the historical Gavrilo Princip. Since the Poseta tracklist is in Serbian Cyrillic we transcribed it into Serbian Latin and additionally translated it into English for comprehension reasons. The tape was ripped in 320kbs by hogon in April 2011.

[1] - ^ Plamen, žrtva, revolucija (in Serbian), a post by user kim_philby in Gavrilo Princip, lik i delo, kontekst, politicka upotreba (post nr. 135, posted on 19.11.2013) on Parapsihopatologija internet forum.
[2] - ^ Careful Easterndaze readers might remember Fast Deadboy from the Crni Pek internet compilation (Nacionalna Asocijacija za Umetnost i Kulturu-Belgrade, 2012), which had a follow up in the form of live concert appearances of some of the compilations’ protagonists during the 2012 Novo Doba comic festival, where Fast Deadboy performed live for the first time in more than 20 years.
[3] - ^ In 2013, the Serbo-Belgian collective Nema tog podruma, which previously re-released a double-cassette of Fast Deadboy’s archival material Predragons your beauty / Nek ad proždre (No Basement is Deep Enough-Belgrade, 2012), organized a ‘play and remix’ retrospective exhibition of Phantom’s visual work titled Nema Tog Podruma III: Најезда Скакаваца where his original visual works were juxtaposed with 31 remixes of his work by contemporary Belgian artists. The event was held at the F44 venue in Antwerp (Belgium).
[4] - ^ One of Phantom’s famous home-made constructions was a primitive rhythm machine assembled from parts of a Sloboda Čačak model vacuum cleaner which he used a lot on early Fast Deadboy recordings. Phantom’s mom later disposed of this novel contraption because she didn’t knew what it was, reckoning that it was a safe move on her part since the family had acquired a new vacuum cleaner anyway.
[5] - ^ Larynx of the Fast Deadboy (in Serbian), Srećko V. Đorđević and Vasa Radovanović article in Liber (nr.4): Total Underground (Liber-Beograd, 2007).
[6] - ^ Predrag Petrović, personal e-mail communication, 19.06.2014.
[7] - ^ Serbian for “You’re a bastard (to American pilots in summer of 1995)”.
[8] - ^ Serbian for “Plague of locusts”.
[9] - ^ Predrag Petrović, personal e-mail communication, 18.06.2014.
[10] - ^ Predrag Petrović, personal e-mail communication, 26.06.2014.
[11] - ^ Predrag Petrović, personal e-mail communication, 26.06.2014.
Posted by hogon at 9:50 AM