1) You can finally order the LP at SpinVinyl (Ljubljana) and you can hear some mp3 samples on the Subkulturni Azil website.
2) Two remaining Hometaping in Self-Management promotions are due this week in Croatia and Serbia, respectfully:

Both promotions start at 13:00 sharp. 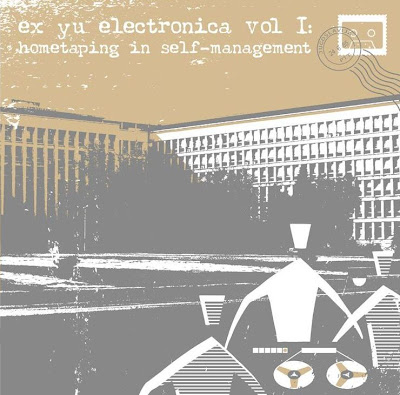 We are proud to announce the release of Hometaping in Self-Management LP, the first in a series of retrospective Ex Yu Electronica compilation LPs that seek to highlight some of the most interesting happenings in the 1980s independent DIY experimental music scene of former Yugoslavia.

As a regionally-focused testimony of 1980s non-academic experimental music practices, Hometaping in Self-Management is the first document of its kind in Eastern-Europe and as such it seeks to expand the known frontiers of the hometaping spectrum. There are elements of fundamentalism to the logic behind this compilation: if the phenomenon of Yugoslav tape experimentalism was globally perceived as a marginal, bordering on nonexistent within the 80s cassette culture – then this compilation treats it as a microcosm on its own right; if Mario Marzidovšek was generally regarded as an obscure person in the global network – then he is nothing short of a superstar on Hometaping in Self-Management ; if Sumanuti Jebači are considered a mere footnote on the Yugoslav hometaping scene – they are a key nexus on the hometaping scene of Croatian Banovina and so on.

Hometaping in Self-Management presents 14 different projects from five republics of the former Socialist Federal Republic of Yugoslavia (with the exception of Montenegro) with 14 tracks spanning from 1981 to 1989. The LP comes in an edition of 300 copies, with a four pages full colour booklet and abundance of information about each individual project, a small introduction into hometaping in SFRY and a general project introduction by its initiator (Dušan Hedl). The LP is realized in cooperation of Subkulturni Azil (Maribor, Slovenia) NGO for culture and art publishing and A Hogon’s Industrial Guide (Belgrade, Serbia) research platform with the support of Ministry of Culture of Slovenia.

The first of three promotional events planned for Hometaping in Self-Management LP will take place in ŠKUC, Ljubljana (Slovenia) on 10.01.2010. at 13h and you are all invited to come. The details on two other promotions in Zagreb and Belgrade, as well as information on distribution of the LP will come soon.