Anonymously, collectively and with no material evidence – a conversation with Iztok Osojnik about an informal counterculture movement in 1970s Ljubljana 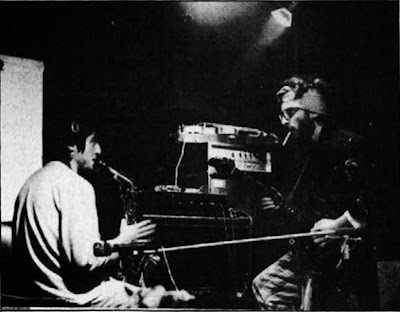 On Wednesday 17th of September 2014, we are discussing the origins, social context and practices of an anonymous collectivist movement which he initiated and was an active participant of. From 1975 to 1982, the movement carried out a string of intermedial actions, happenings and installations in which the line between a rock concert, performance art and a theatre show was often blurred. Firmly grounded on the principles of deconstruction and disidentification, the movement had a strong anti-institutional drive from the start; stubbornly rejecting any kind of formalization (systematical archiving, preserving records of activities, etc) and institutionalization (exhibitions, exposing in the space and context of art) of their work in an attempt to preclude their own historization.


Of special interest to us is the movement’s rock section whose representatives – Papa Kinjal Band and D’Pravda – are associated with the Ljubljana Rock in Opposition scene and in the same time represent a nucleus of post-hippy Ljubljana underground that survived the advent of punk and managed to retain its presence in the Slovenian capital well into the second half of the 1980s. For more information about Ljubljana RIO scene and the movement itself read here and here.
speaker: Iztok Osojnik
talk moderation: hogon
language: Serbian

The event will be recorded and subtitled for the A hogon's industrial guide archive.
Posted by hogon at 6:41 AM 2 comments: