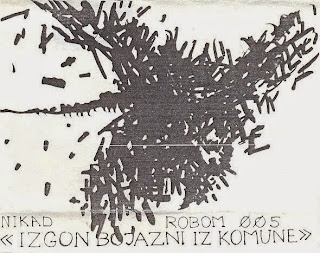 On Monday 10th of November 2014, we're discussing the contexts and practices of the Nikad Robom collective – an independent cassette label, concert promoting agency and a hometaping organization from Belgrade active on the Yugoslav alternative music scene during the latter half of the 1980s – with its founders Bojan Đorđević and Aleksandar Konjikušić.


Nikad Robom collective was active from 1984 to 1996 in various shapes and forms and was covering a spectrum of post-Rock in Opposition music – from art rock and alternative jazz to contemporary classical and the so called New Music. The duo behind the Nikad Robom collective was in the same time an instigator of the eponymous cassette edition which was one of the first independent cassette labels in former Yugoslavia, an eponymous concert promoting agency which organized concerts of numerous post-RIO and New Music bands in Belgrade as well as a eponymous hometaping operation which dealt with copying, cataloguing and distributing releases which were unavailable on the Yugoslav market, making it a kind of living open archive of Western alternative music of the time. For more information about the Nikad Robom collective read here.

The event will be recorded and subtitled for the A hogon's industrial guide archive.
Posted by hogon at 8:59 PM No comments: