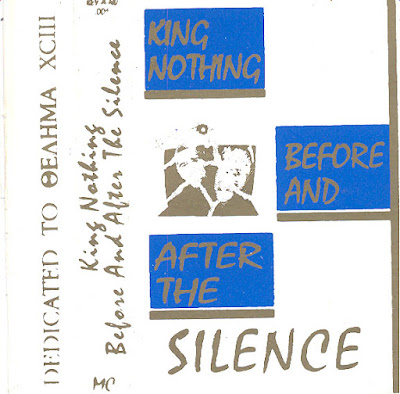 This entry of A hogon's industrial guide was revised on 21.03.2021. The original version of the article is still accessible through the Internet archive via this link.

The release presented here is Before and After The Silence cassette from 1994 by King Nothing, the moniker of the entity previously known as Larynx – the Yugoslav 1980s hometaping wunderkind – who in 1990s was the brain behind the cult noise rock outfit Demencija Prekoks (Serbian for “Dementia Praecox”). King Nothing (née Đorđe Dimitrijević) hails from Požarevac, a small city in east central Serbia that you could hardly call a punk Mecca, but a city that’s mostly known for its political power-struggles as it was the stronghold of former Milošević regime during the 1990s as well as the backbone of opposition movement. While Larynx was a relative unknown for the wider alternative audience in Yugoslavia (though nonetheless a key figure in the hermetic domain of Yugoslavian 1980s cassette experimentalism[1]), Demencija Prekoks on the other hand was a notorious band that was a beacon of the Yugoslav underground throughout the decade – mainly because of their chaotic live shows and noted media presence (several TV appearances, music videos, etc) – and one that had a special place in the popular imagination of the Yugo 1990s underground as everyone’s favourite for affectionate othering or a benchmark of sorts that was often invoked for comparisons due to its perceived excessiveness and outlandishness in regard to the musical standards of the time. Demencija Prekoks was always that band, a threshold to be reached or carefully avoided.

King Nothing came into being in 1990 and in the early 1990s mostly functioned as an adjunct to Demencija Prekoks as the materials originally developed for King Nothing often served as blueprint for future Demencija Prekoks tracks. Although King Nothing had released about a dozen tapes by 1994, these were released on his increasingly diminishing home output LX Music LTD which by the early 1990s became more of a private tape repository than a proper label[2] whereas Demencija Prekoks released its first two cassettes on Take It Or Leave It Records, a professional indie publisher. In 1994, Key–A–No Records became the new generic home label for all endeavours of the Požarevac hometaping maverick with the release of King Nothing’s Before And After The Silence tape as its inaugural release[3]. The material for the cassette was recorded in a strange interregnum for the band in which King Nothing had decreed in the press and around town that Demencija Prekoks ceased to exist on 29.05.1994[4]. Nonetheless, the band regrouped in 1996 and King Nothing found itself again in the sidelines for the remainder of the 1990s with no new releases as King Nothing himself was still fully committed to his primary project. It was only after a short period in the end of the 1990s and beginning of the 2000s wherein Demencija Prekoks gradually slumped into a prolonged period of hibernation[5] that this changed and in 2002 King Nothing took over the primacy in planning and execution at the Key–A–No headquarters. Throughout the 2000s King Nothing was the main Key–A–No project releasing nineteen albums from 2002 and 2007 and had provided a stepping stone for its author’s transformation from a performer to digital audio workstation composer.

In terms of its musical direction, Before and After The Silence tape doesn’t differ too much from Demencija Prekoks’ broadly construed noise rock with atonal overtones, however this was not generally the case with King Nothing as its’ program was much more heterogeneous compared to DP’s insofar as it offered Đorđe more freedom to experiment in different musical directions[6]. In many media appearances as well as fanzine interviews in the 1990s, King Nothing used the term white music to describe the type of sound he was pursuing with his projects[7]. The term had originally came from Western rock press where the division of music into respective black and white family trees was popular at the time and it wasn’t long until the Yugoslavian rock press and music audiences picked it up, too[8]. While the original, racial meaning of the term was not lost to King Nothing – as he invoked it too at times[9] – the concept of white music connected with his poetics and worldview at a particular nexus where lived realities, both individual-psychological as well as broader sociopolitical ones, are juxtaposed onto a magickal-symbolic framework and then affected through a variety of artistic and magickal procedures in a way to achieve personal and collective individuation.

In a 1994 interview in the War Pigs fanzine, King Nothing correlated the beginning of the 1990s with the Alchemical Nigredo (or Blackness)[10], the stage of decay and putrefaction. The context for this sort of framing was provided by a historical event that was unfolding at the inception point of both King Nothing (1990) and Demencija Prekoks (1991): the looming civil war as well as dissolution of Yugoslavia. As the country gradually spiralled into chaos, events became more and more random and this loss of objective ground was especially visible in the media as the truth about the conflict was being pulled apart by competing propaganda narratives. In the vacuum that opened with the collapse of central authority, hearsay and subtext superseded text. A growing sense of insecurity took its toll on the mental health of its populace – even in places like Požarevac that were not directly affected by war operations. Both projects were conceptualized with this event in the foreground: Demencija Prekoks, itself a medical anachronism for schizophrenia, and King Nothing as a kind of a nihilistic sublimation of this experience.

Like many industrial musicians before him[11], King Nothing followed a path peppered by anti-psychiatric theory (in his case R. D. Laing in particular) that theorized that by immersing or redefining oneself through one’s own psychiatric condition a significant amelioration of symptoms can be achieved; in King Nothing’s case in particular, this involved a process of spiritual-artistic self-therapy through which he could exteriorize his deeply felt anguish and confront head on the inner demons that the war had unleashed. The underlying idea was that the magickal role of Demencija Prekoks as a self-described ultra-nihilist force was in a way to respond to the chaos of early 1990s in Yugoslavia with even more chaos of its own (i.e. noise) and in this way accelerate the Alchemic cycle to bring about the Albedo (or Whiteness), the second of the four stages of the Magnum Opus (hence white music)[12]. However, this cathartic drive through noise ultimately leads to silence or nothingness per King Nothing as an expression of his own True Will; not to nihilism but rather No-thingness, the Buddhist Śūnyatā – wherein the chaotic non-entity[13] finally dissolves and finds its peace. Since most of these movements in King Nothing’s poetic are sketched in these sets of pairs (like Nigredo / Albedo, black / white, noise / silence, illness / health, chaos / nothingness) it is entirely probable that a different interpretation could be made by rearranging the relationship between the element pairs.

Unlike much of the early King Nothing repertoire that ended up serving as Demencija Prekoks demo fodder – a pool of ready-made song material to build upon – all the tracks on Before and After The Silence were conceived as King Nothing songs by design because by 1994 Demencija Prekoks had already developed a life of its own and the two projects were thought about as separate entities.

The tape is a dense, cut and paste patchwork of pre-recorded loops and sampled phrases that make extensive use of the studio’s multitrack mixboard recording possibilities. Moreover, since King Nothing is essentially a one-man-band here that plays all the instruments and effects himself, the emphasis on studio-as-an-instrument approach cannot be overstated. Due to a lack of post-production editing on Before And After The Silence, the way these multiple layers are transposed onto each other at times appears to be clunky, but most of the time this clunkiness just adds to the overall charm of the raw lo-fi chaos going on here. While the A side is more on the intense and spastic part of the DIY noise rock spectrum, the B side, on the other hand, has a more turgid, psychedelic atmosphere to it. The imagery invoked in the lyrics ranges from surrealistic accounts of tripping on fly juices (Moj deo muve; Serbian for “My chunk of the fly”) and lurid inquiries into cases of foetal cannibalism (Umetnost abortusa; Serbian for “Art of the abortion”) to autopoetic insights into King Nothing’s metaphystics (Bang every beat). Most of the song lyrics on A side are in Serbian while most of the B side are in English.

All the materials were recorded at Studio Sedlić in Požarevac – where also most of the Demencija Prekoks releases were also recorded[14] – and released in 30 copies on King Nothing’s own Key-A-No Records in November of 1994. The cassette was most likely scooped from either Svi Marš Na Ples forum or FTP Kombinat, an invite only file-sharing FTP server, both relevant resources for Yugoslavian and ex-Yugoslavian alternative music in the late 2000s and early 2010s. The tape was ripped in 320 kbs. An enormous thanks is due to Stevan Lenhart for his amazing archive preservation efforts, King Nothing for his patience and Dr. Srele for the networking.